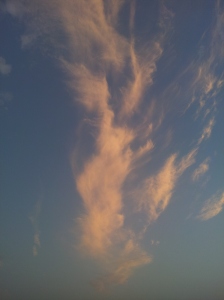 Easter is a time of sacrifice and rejoicing. A time to reflect on all that Jesus Christ did for us to put us right with our Father. When you don’t recognise the crucifixion as the chance for you to get right with God, the cross becomes a mere ornament of religion or a fashion item for the lost. For some Easter is no longer the greatest religious festival in the Christian calendar but chance to over indulge in chocolate eggs. For some, it is no longer an opportunity to celebrate death defeated and all illnesses healed, but a time to wonder where the Easter Bunny left his stash or just a welcome break from daily drudgery.

I once went to Keswick Convention in Cambria, not long after I had given my heart to the Lord. The minister (whose name I have sadly forgotten) preached on Chapter 19 of John’s Gospel. I’d read it numerous times before, but as this minister went through it peeling the layers of meaning from every verse; it was as if I was hearing it for the first time.

He highlighted the three types of flogging that the Romans dealt out as punishment and said our Lord suffered the worst one, scourging. He was flayed alive by a cat-of-nine tails containing sharp metal edges which would have ripped Jesus’ flesh from His back. An image gorily depicted in graphic detail by Mel Gibson in ‘The Passion of Christ’ which is on satellite television now. Seven centimetre long thorns would have been thrust into his scalp when the mocking soldiers crowned him. His purple robe was symbolic of His ‘King of the Jews’ status, a title Jews recognized as reserved only for God Himself. This was reiterated in the banner written above the cross, ’Jesus of Nazareth, The King of The Jews’ which was written in Greek, Roman and Hebrew to inform the known world, the educated, those in power and the religious. Crucifixion itself was a long, excruciatingly painful death and was considered shameful by the descendants of Abraham.

Few people who deny Jesus can realize more than 365 prophesies written in the Old Testament about the Messiah were fulfilled that first Easter, when Jesus died and rose again. Psalm 22 verse 18 foretells of the soldiers casting lots for the Lord’s tunic, for example.

On hearing all this at that Keswick Convention, it was as if a veil had been lifted from my eyes and my ears had been unplugged; I was so deeply moved by the Holy Spirit that tears welled in my eyes and I started to sob. I wept for most of the sermon in an unstoppable flood. It was not what the minister said, or the way he said it, but the power in the words that touched something deep inside. I had already repented of my sins but this was a revelation of the love of God. Our God who let His only son suffer so much as a sacrifice for a sinner like me!

‘This is how God showed His love for us: God sent His only Son into the world so we might live through him. This is the kind of love we are talking about – not that we once upon a time loved God, but that He loved us and sent His Son as a sacrifice to clear away our sins and the damage they’ve done to our relationship with God.’ 1John 4:7 from The Message bible.

To know Jesus personally pray: Dear Lord Jesus, thank you for dying on the cross for my sins. Be Lord of my life and please fill me with your Holy Spirit. Help me to be all you created me to be. In your name I ask it, Amen.

One thought on “Cross Purposes”