A man knocked at our door this evening while I was cooking dinner. My youngest son ran into the kitchen warily to tell me. All of my three boys have been trained from a young age not to open the door to strangers and to have anyone knock on the door after 7pm was unusual, never mind a stranger.

Through the frosted glass I could see he was carrying something, so hesitantly I asked him what he wanted without opening the door.  “Do you have a plaster?” he asked, “I’ve badly cut my finger.”

Only last week I had asked a stranger for a plaster myself, how could I refuse? I quickly got a large plaster and opened the door. He thrust a hairy middle finger with a nasty wound up to my face saying, “I’ve just fallen on the track and cut my finger.”

“That looks as though it might need a stitch,” I said as I opened the plaster and wrapped it around the open wound. He was slightly dishevelled looking with the semi-glazed eyes of someone who had been drinking, though his speech was clear. I felt I should tell him I was a Christian and asked him if he would let me pray for him, which he did.

“Dear Lord Jesus, please draw near and heal this man’s finger and let it be a witness to him of your healing power and save his soul, Amen,” I prayed.

Then he asked if I thought it needed a stitch and I said, “No, not now I have prayed for you.” He said maybe he should go to the local hospital to get it looked at and asked if I had some money for his fare.

Maybe it was then that I started to be suspicious because many of us will have been stopped and asked for money for fare or food by people who looked like they might use the money to feed an addiction for drink or drugs. But aren’t we meant to give when someone asks for our help? I never carry much cash because I had money stolen from me once when we lived in London and what little paper cash I had was long spent entertaining my kids at the local Leisure Centre this evening.

Suddenly, my youngest son, who had been standing by my side all along, disappeared and quickly reappeared thrusting a ten pound note, which his grandad had given him while visiting a fortnight earlier. “He can have this Mam,” he said offering all the cash he had in the world.

“Now what should I do?” I thought. “Should I let him give his money to help the poor, as Jesus taught? Or should I tell him he shouldn’t give his money, and be a hypocrit, when this man looked as if he needed our help, even if he was carrying a bulging drawstring bag, a bottle, was unshaven, with a front tooth and the tops of his ears missing? Doesn’t the Bible tell us to help strangers who might come to our door because they could be angels, like the ones who visited Abraham? Aren’t we not meant to judge people on their appearance?

“Don’t you trust me?” he said. “Look, I’m wearing Armani jeans. do I look like a thief?”
I would’t have a clue if they were Armani jeans or not, or care. Call me a fool if you like, but I preferred to give this man the benefit of the doubt. I gave him the ten pound note and he said he would return it with interest. My son had been saying he wanted to give his money to charity, after all. I felt ashamed that my eight-year-old son has more of the Father’s heart than I do.

Ten minutes later my husband arrived home from work and we told him about our unusual visitor. “Are you stupid or something?” He said angrily. “I’ve just seen a man of that description talking to a man down the road. He’s probably trying to get money out of him too.”

We quickly walked down the road together, but there was no sign of the man in the Armani jeans. My husband spoke to the neighbour whom he had seen talking to him. It turned out he had approached him with an injured finger and the same tale of woe. He had taken off my plaster and thrown it away.

“You won’t see that tenner again,” our neighbour said. “He’s probably in the shop buying booze as we speak!”

If you ask me if I will ever give help to a stranger in need again, yes I will. Who am I to judge his motive? What if he had really needed my help? What if I was in need and someone calling themselves a Christian refused to help me, wouldn’t they appear to be a real hypocrit?

As I called the police to report the incident, because I didn’t want anyone else to be conned, the policeman on the end of the line said: “I’m a Christian, and I would have done exactly the same.”

The real question which I want to ask is: “would you?” 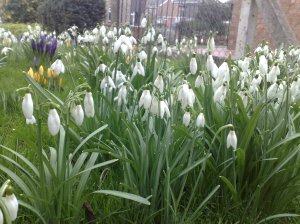 6 thoughts on “WHAT WOULD YOU DO?”