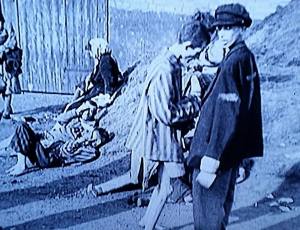 The world must never see anything like the Holocaust atrocities ever again. It is up to us to stand up for what is right and stop what we know, in our hearts, is wrong. We must educate our children that cruelty to other human beings will not be tolerated. Let the deaths of six million people killed during Hitler’s campaign to exterminate the Jews, act as a beacon in the darkness to help to improve the human race. Let our hearts not be hardened.

On the 70th Anniversary of the Liberation of Auschwitz and Bikenau, I went to the memorial ceremony at the University of Essex. Auschwitz survivor, Frank Bright, (86) lit a special Holocaust candle to mark the anniversary.

About 100 people joined him and later walked around the University of Essex in a candlelit procession. As we solemnly walked behind a banner and a man playing Jewish music on his sax, I had to hold back the tears for the lost generations. 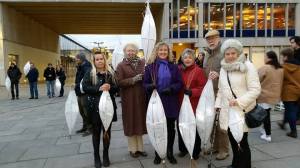 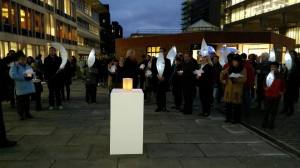 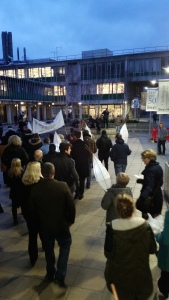 At the end of the procession, the lanterns were lent against the stand holding the candle, forming a symbolic sculpture of light in the growing darkness.

I had the honour to speak to Frank, who told me how ‘monstrous’ it was in Auschwitz. He had gone there as a teenager and all he had to eat was beetroot soup. “Beetroot is for cows and sheep and it affected everyone’s stomachs because human’s don’t have the right enzymes to digest them,’ he said.

‘Over time, our stomachs developed the enzymes, which is why I survived, but later, when we were liberated, I could not eat normal food. It took years before I could eat proper nourishment.’

The conditions were tough. He had to sleep on concrete with one blanket between six people. But Frank (pictured above left with Professor Rainer Schulze of the University of Essex) was one of the lucky ones. He had been selected to make propellers in a factory while his mother, along with 1.1million others, had been sent to the gas chambers. Ninety per cent of the victims were Jewish; the rest were gypsies, people who helped the Jews or those who worked in the resistance. Let’s pray such atrocities never happen again to any nation, creed or faith.

I am passionate that we should not forget the Holocaust because I have visited Auschwitz and it broke my heart. I can’t stand cruelty in any form.

Sadly, there are things on the news today which hint that the world has not learnt its lesson. Let’s do what we can, when we can, while we can!

3 thoughts on “Do What You Can To Prevent Another Holocaust”