How lovely to sing praises to the Lord and to pray as we sailed on the Sea of Galilee. My heart soared to new heights as we danced and waved banners. Our congregation came from all the nations and the four corners of the earth. We sang and danced in unison as the bride of Christ.

The sun shone brightly, but not as brightly as the Lord shone in my heart. It gave new meaning to Isaiah’s words in 60 verse 1:

For your light has come!

And the glory of the Lord is risen upon you.’

Those moments of worshipful joy were so heavenly and of far greater comfort and value than all of the churches we had been in while in the Holy Land. ‘The joy of the Lord is my strength.’

I had been sickened by the religious fervour at the Church of The Holy Sepulchre in Old Jerusalem, which claims to surround and contain Golgotha, the place where Jesus’s body was prepared for the grave and His tomb. It was like Blackpool for Christians! 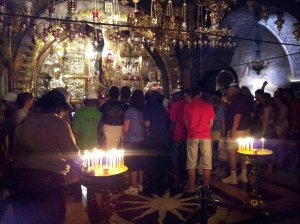 If I had known what it was like before we went in, I would never have gone, but it was part of our tour. Instead, I would have preferred to have gone to the Garden Tomb, which also might not have be the actual place where Jesus was buried, but at least I have heard good reports about how peaceful it is.

In the Church of The Holy Sepulchre, I had joined a queue, mystified as to where it was going. I saw people bending below a wooden cross with a painted, crucified Christ upon it. As I went around the queue to take a closer look, a guide pushed me away saying ‘No, my people first.’ I glanced passed her and saw ‘her people’ kissing a rock which I was told was where the cross had stood. Really! I am sorry but I could not believe this was the place and if it is, it is now ruined by religious spirits and Mammon. I can now understand why the Lord has told us not to make images and worship them. ‘Christ is risen’ and came to set people free.

More spiritual and much more fulfilling for me, was the boat trip on The Sea of Galilee. Jesus had walked on this very water and had ordered the wind and the storm to cease. It was here that Christ had shown his true identity as part of the Trinity.

Instead of buying any of the religious memorabilia in some of the shops, I picked a pebble from the bed of the Sea of Galilee and put it in my pocket to remind me of our special day worshiping Him in spirit and in truth!