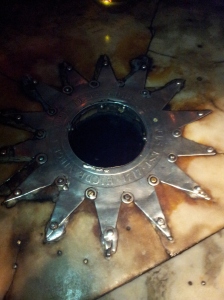 ‘For unto us a child is born, unto us a son is given: and the government shall be upon his shoulder: and his name shall be called Wonderful, Counsellor, The mighty God, The everlasting Father, The Prince of Peace,’ Isaiah 9:6.

What would the Lord Jesus think of Bethlehem now, I wonder? His birthplace has been transformed into a Mecca for the religious, a Blackpool for Christians, a special place for the devout and I found myself in the crowd clambering to see the place where Christ came into the world.

Everyone who enters the Church of the Nativity front door bows their heads to the Lord Jesus Christ, not because the Bible says: ‘At the name of Jesus every knee shall bow’, but because the door has been bricked up to prevent camels and horses entering the church, as they did in the times of the Crusaders. I bowed my head voluntarily while the low lintel forces others to bow their heads as they step inside. 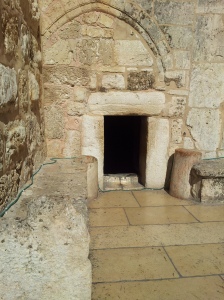 As my eyes adjusted to the dim lighting after leaving the brilliant sunlight, I reassured myself that I was actually here, at the birthplace of Christ, or so I was told. ‘But why does it look like the inside of a church? Why did it resemble the Vatican?’ I asked myself. Our Palestinian, Christian guide, Ashraf, quickly told us the Benedictines had built the church in the Third Century on the place they thought was the birthplace of Christ. I am not a skeptic by nature, but skepticism was quickly rising in me.

Ownership of the church is now shared between the Catholic, Orthodox and Armenian churches. The pious paintings of ‘Madonna and Child’ clash with the numerous lanterns each bedecked with a Christmas bauble, as the swashbuckling Orthodox priests march up and down swinging incense, as though fumigating us before they allowed mere mortals to see the actual nativity spot. It’s Christmas all year round in Bethlehem. 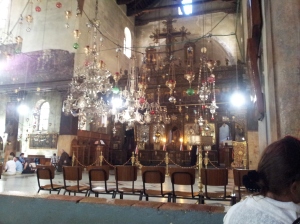 Was this really where shepherds and wise men worshipped the infant King? The place where a new star shone to mark the birth of the King of kings? I don’t know. We were herded into an antechamber and then down some curtained stairs to the crypt, where people have congregated for more than 2,000 years. And there it was; the actual birthplace, marked by a golden, 14 pointed-star representing the 14 generations before Jesus. In the centre, a hole revealed the actual floor. I touched the centre and felt no surge of the Holy Spirit confirming this a Holy place; I felt only cold stone where Mary might have lain or squatted to bring Jesus into the world. You only have seconds to pay homage before the next pilgrim claims the spot. A couple of metres away was a dark corner illuminated by hanging oil lamps, and we were told this cavern was the actual manger. Our preconceived ideas that the manger was like the wooden one that has decorated a zillion Christmas cards, was sent packing. Within less than a minute, we were shown the other stairs, which exit into the Armenian section of the church, where a lone, male voice sang in an unknown tongue, adding to the mystery of the place. 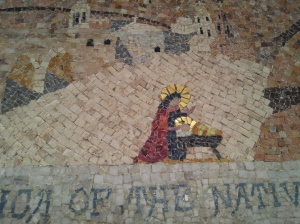 I found myself fighting disbelief that this was the actual place of Christ’s birth. I asked our guide, Ashraf how the Benedictines could be so certain that this was where God decided to give His only begotten son to us. Ashraf told us that at the time of the birth, Bethlehem was about the size of a couple of football pitches and not the sprawl of homes of 5,000 residents it is now, which merge into the outskirts of Jerusalem. Also the Benedictines are found people regularly gathering around the cave and had been told it was the stable were Jesus was born. Something that had been passed on by rumour, or word of mouth, for centuries.

Bethlehem and Jerusalem were only separated by a tall wall and check point to the West Bank, where our usual guide, Danielle, had made a sharp exit as recommended by the Government of Israel. Both of our guides were equally as passionate about their race, beliefs and culture. It’s just a shame that the Prince of Peace is remembered in such hostile circumstances.

Please bless Israel and all of her inhabitants and those in neighbouring countries and the West Bank. Bring peace between the Jews, the Muslims and the Christians.

In your name we ask it, Amen.

2 thoughts on “Unto Us A Child Is Born”